Experiencing the richness of life in Meemure

A road that has seen more animals than vehicles, the fragrance of freshly brewed tea brushes my face, a river gushing deep in the woods is so clear like its right next to me, drizzles play hide & seek with sun rays, butterflies are hovering around, there is a creaky noise and the vehicle stops. It was not a dream, I was in a place where dreams got its life, I was in a place where breeze got its wings, and I was in a place where drizzles got its rhythm. I take a deep breath, open my eyes & ears wide open; the driver says, it’s a tea break. I stepped out smelling petrichor and turned to a beautiful view surrounded by wildflowers, I ordered a Tea or Te as they call it and Vade. 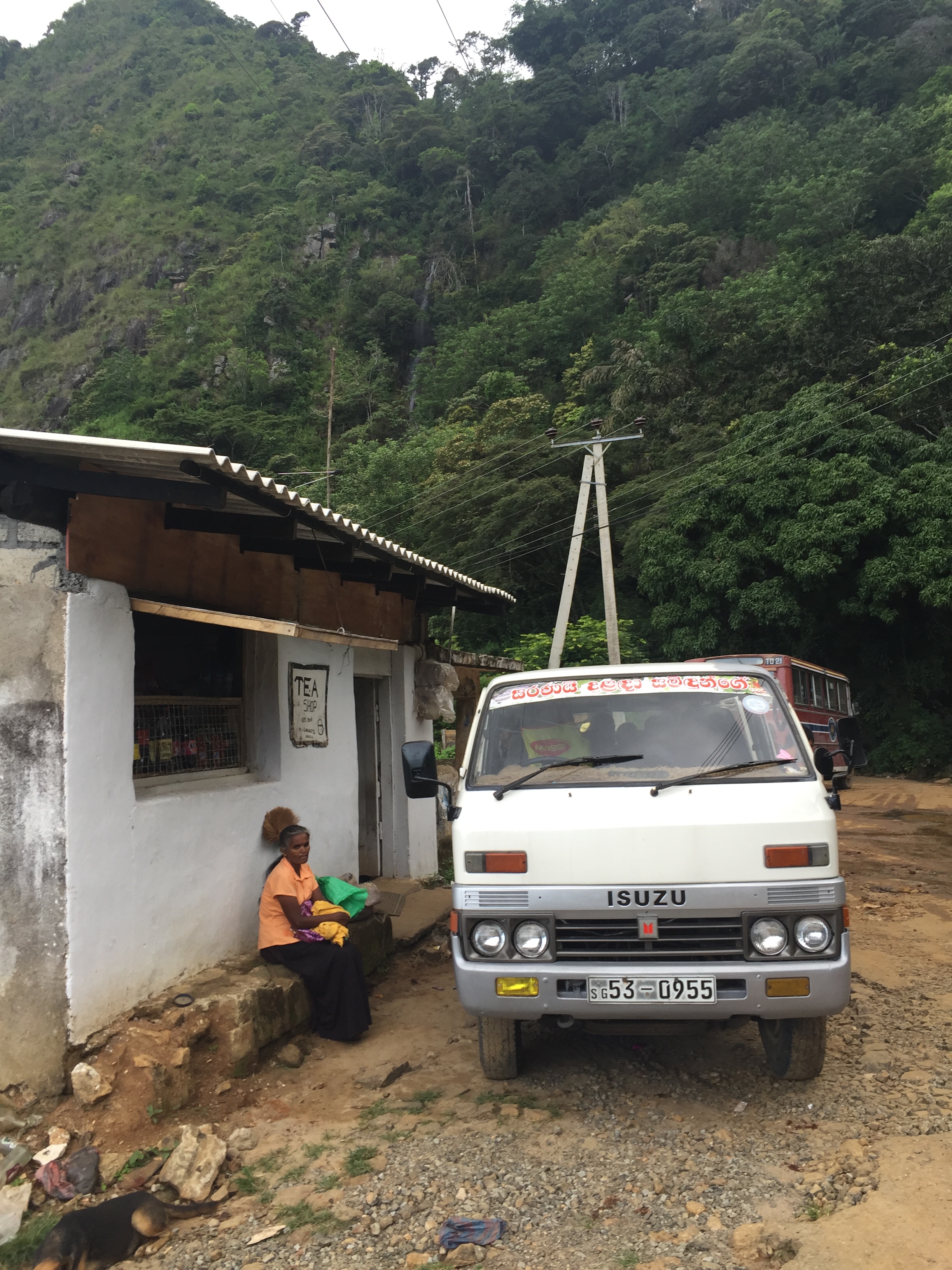 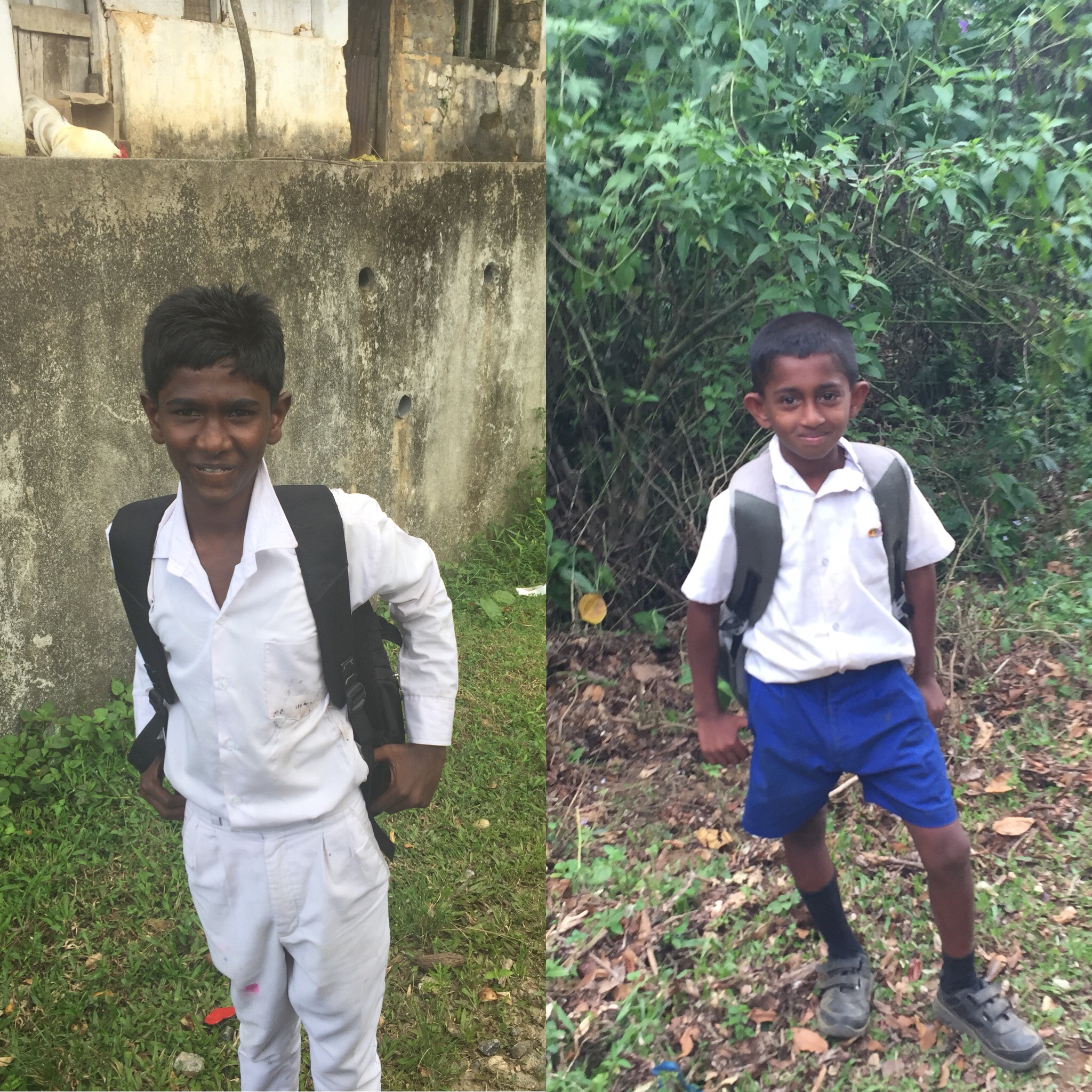 Everyone in the van was excited to know I am from India, I spoke to them in Tamil so the kids assumed that I am good friends with Tamil Cinema (Kolywood) actors. They started to pass on their message which they requested me to share with their heroes. They shared their favorite movies, had a little fight amongst themselves supporting their own hero, invited me to their homes, insisted that I should never forget them and made sure that I will pass on their message to their heroes.

Sri Lanka and India are very closely knit as we connect in the stories of Ramayana, when I was at Rumasalla I was told Sita was kept here after Ravana kidnapped her. In the van I met a teacher who showed me the cone-shaped mountain called Lakegala, telling that Ravana designed his airplane on that mountain and flew from there many times to India and one of the times was to kidnap Sita. It is said that he chose that mountain due to its shape which was easier for the plane to take off. 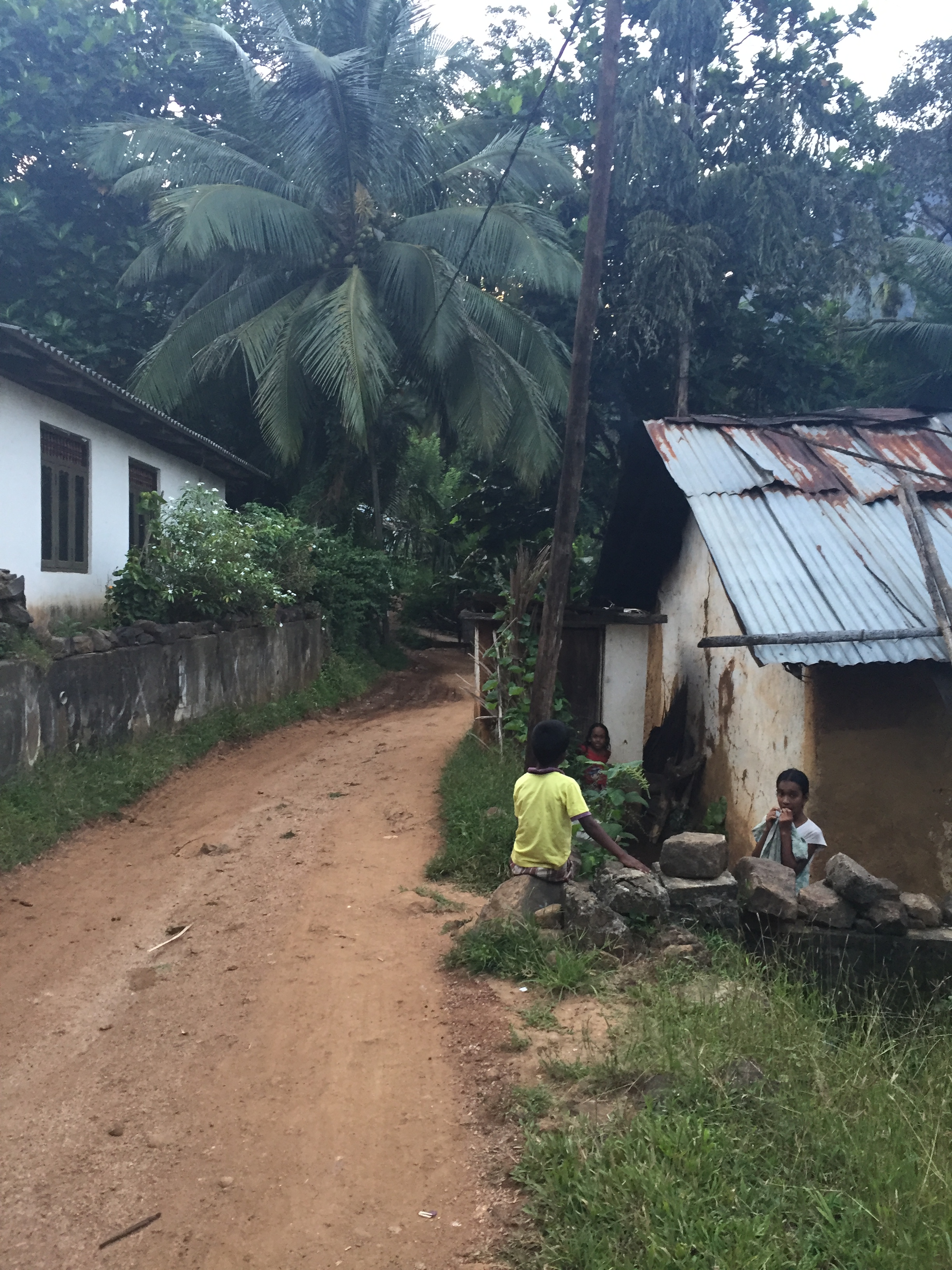 It was 5 in the evening when I entered my host’s house where I was welcomed with pepper creepers and areca nut; I sat in the verandah watching a leech slowly moving and there comes the man in his tuk-tuk. A long grey beard, thick mustache that he maneuvered as he approached me; we greeted with Namaste, he said let’s go for a walk in the village. I was exhausted and asked if we can go tomorrow, he said why tomorrow, let’s go now. I grinned and we started walking on the thick concrete road along the roof tiled evenly built houses, I was introduced to everyone whom we met on the way as India, and they asked if I have come alone. He says yes, he smiles, I smile, they smile and we move on.

This tree is 400 years old, as old as the village he said; also considered as a sacred tree of the village. The villagers gather here for a chit-chat or for any discussions related to the village. Thinking of the number of stories and gossips this tree must have stored in his trunk, I sat under its shade listening to the eerie air that passed by each leaf of paddy. I asked him how many families live here and he said about 120 families with around 600 people. With the rich paddy fields everywhere, it was very evident that paddy is their major source of income but they also have additional crops like beans and pepper. They also generate income from Kitul Honey, honey extracted from a palm tree called Kitul and from Jaggery; some of them generate income through tuk-tuk as well. For the past few years, this village has fallen in the eyes of travelers which are turning out to be a good source of income too. 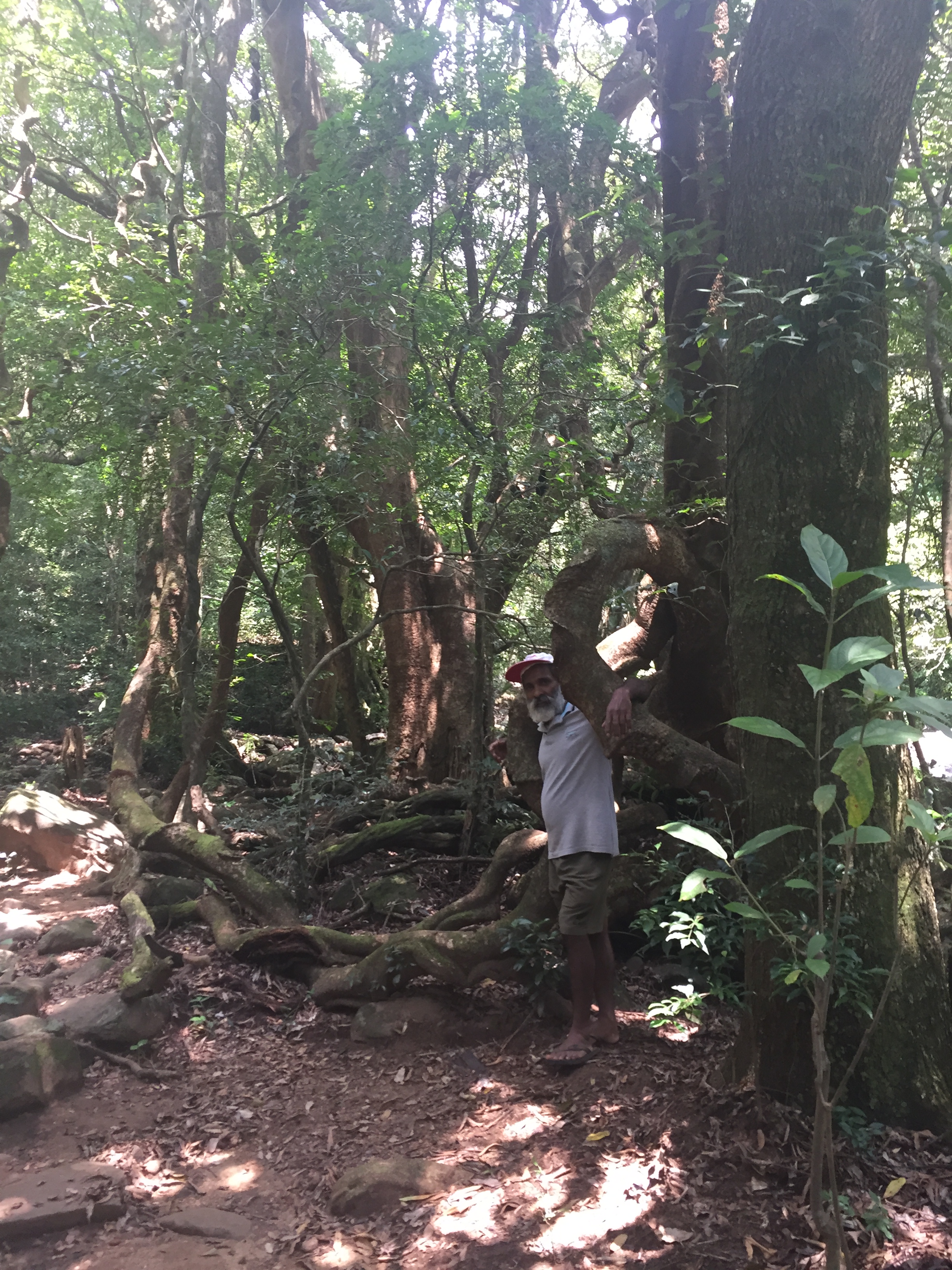 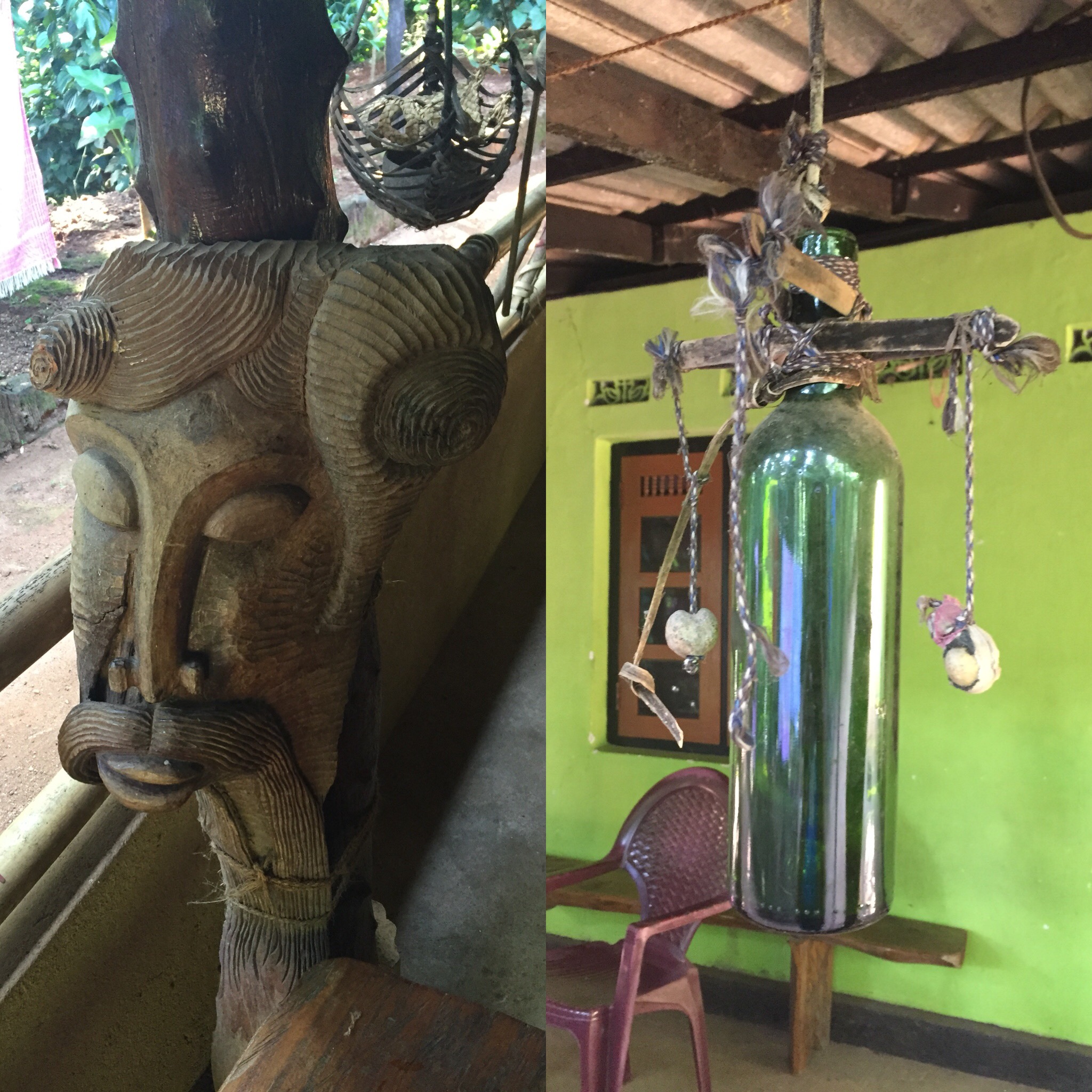 Mr. Navaratna, 52 years young man, my host proudly says he is the only man who can speak English in the village, in the year 2000 he started to host travelers in his house. His house is a mini-museum with some unique wooden handicrafts and the traditional tools used for farming and cooking; all displayed in his verandah. The food, my favorite episode of this life where I get alive again came to me on the dining table; this was the best Sri Lankan food my taste buds have relished. The spices were glowing in the food; the result of organic farming showed up in every bite I savored.

After our dinner, few boys from the village joined us who shared some of their adventurous stories around the village. They were talking about the hikes and group of people who come to hike on Lakegala, there are also many trails they have discovered through Meemure that connects to another side of Lakegala which lasts for few days. Just a thought of it gets me Goosebumps; that’s how dense and beautiful the forest is. I dropped off my excitement to do this the next time and started to savor the freshly brewed coconut arrack.

A new day begun, I came out of my room to see him sharpening his machete, why do we need this, I asked. We are entering a forest, this is for our safety. I took a gulp of my saliva, rubbed my palms with fear and followed him into the forest. Do you have such forest in India? I said yeah, we do have such forests. Do you have anything like Meemure? Ah, well India is too big and yes we do have such beautiful and remote villages in India too I said. We laughed, it echoed and then a perfect silence. Echoes continued for a while and he stopped to pick up some plastic covers, look how tourism is slowly spoiling the nature. I always tell my travelers not to litter anywhere but there are few locals who come to spoil the place, whined for a while and moved with our echoes again.

We stopped by a waterfall, he says let’s rest here for a bit; I lie down on the rock staring at the sky, thanking the universe for letting me see this wonderful gift given by nature itself. Ah, then there comes my friends’ leeches to play around on my feet, I panicked for a bit initially and then started to ignore and initiated conversations with the trees. 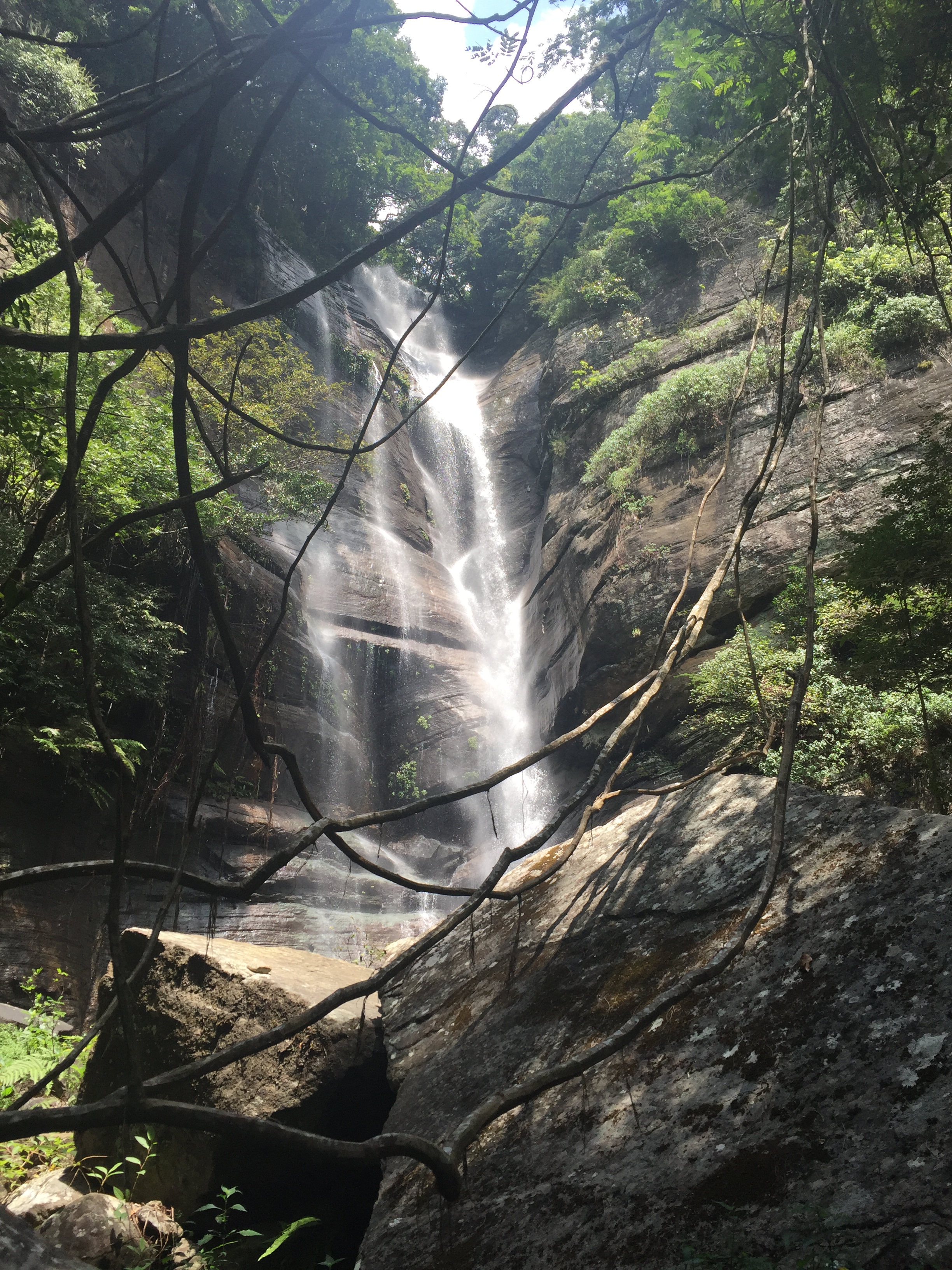 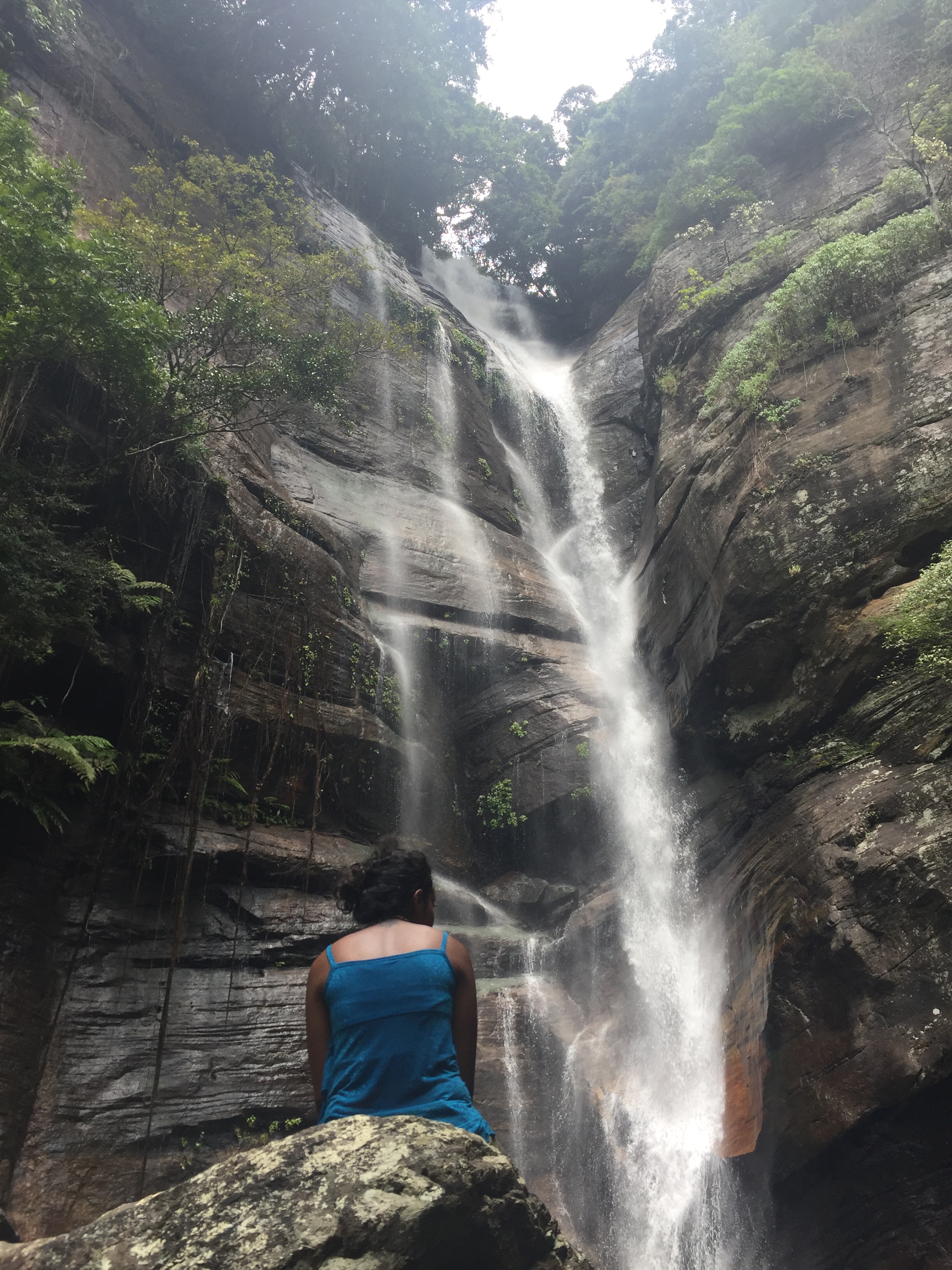 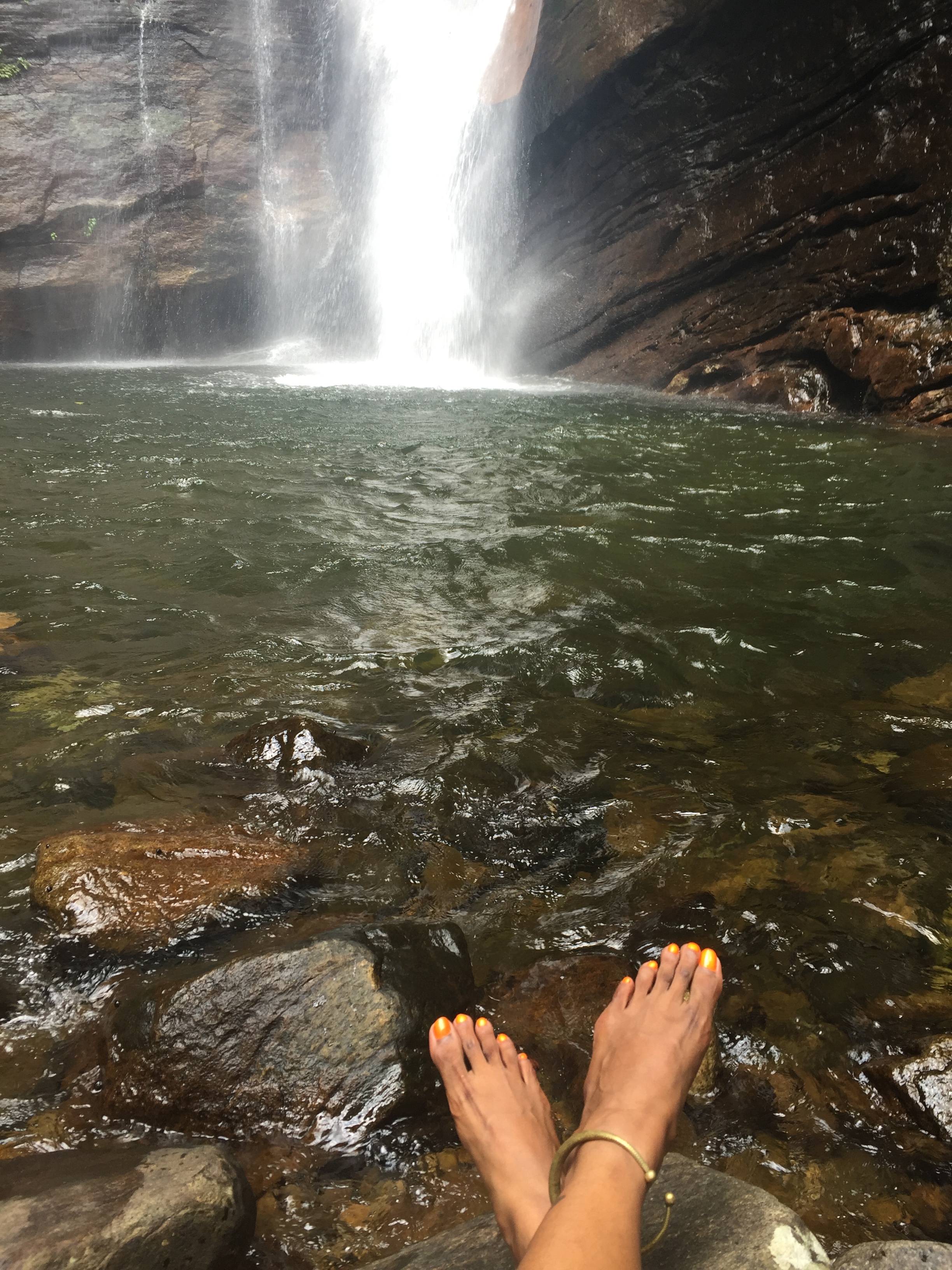 After a while, we stopped at another waterfall, I will have to say; it was straight out of a magical land. I felt like I was in one of those fairytale books where I could smell the fragrance of flowers, butterflies all around me fluttering around, water ripples formed by the waterfall was so inviting to take a dip. I turned around and saw Navaratna Aiyya in a deep sleep; I was in my sleep too with my eyes open. He woke up and says; it’s so peaceful here; I always fall asleep as soon as I reach this place. He also told me that this fall was named after him as he discovered it, but there were few other people who claimed that’s not true.  What’s there in a name? I chose to just leave it as is and call it as my “Fairytale dream”. 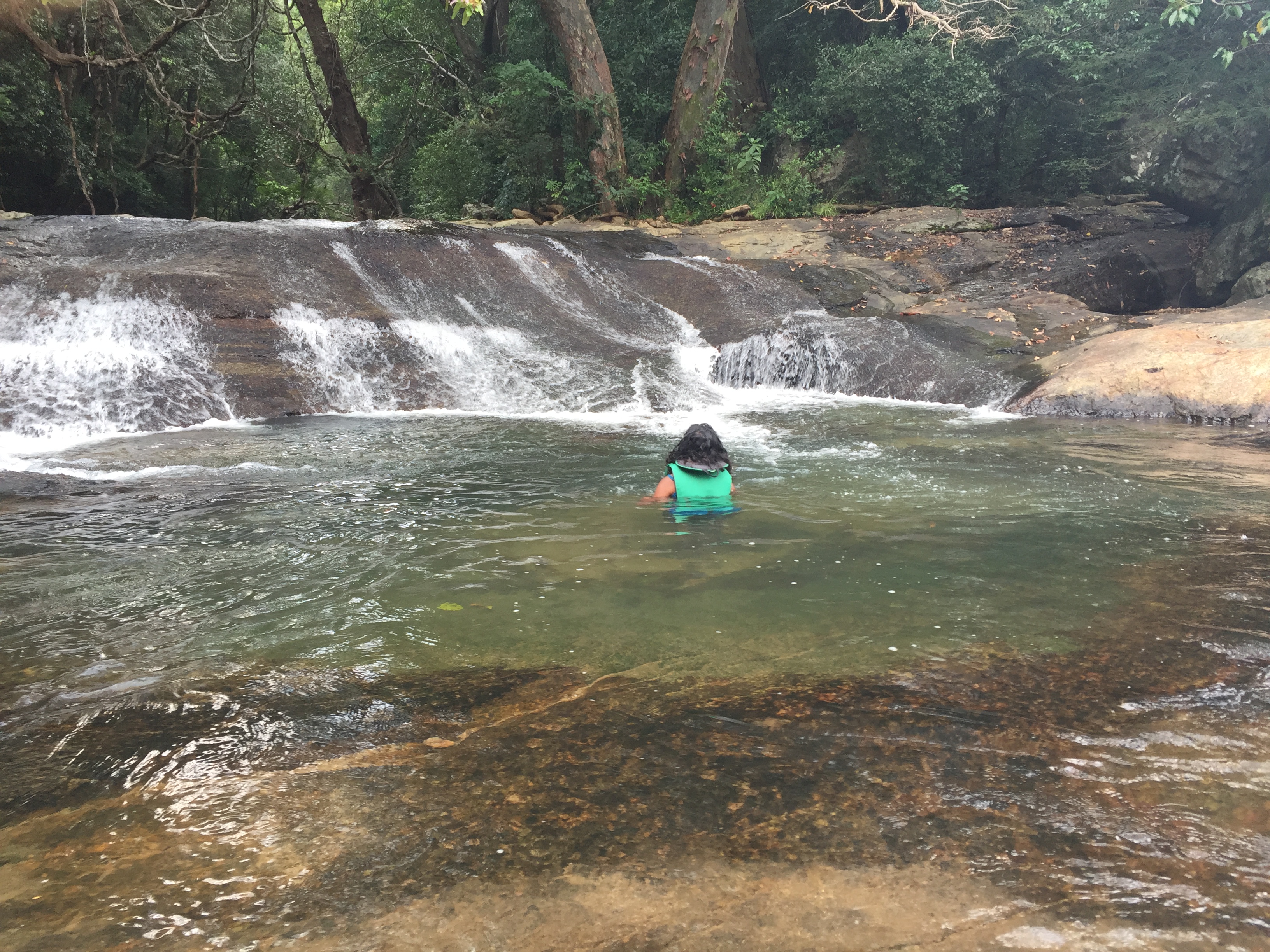 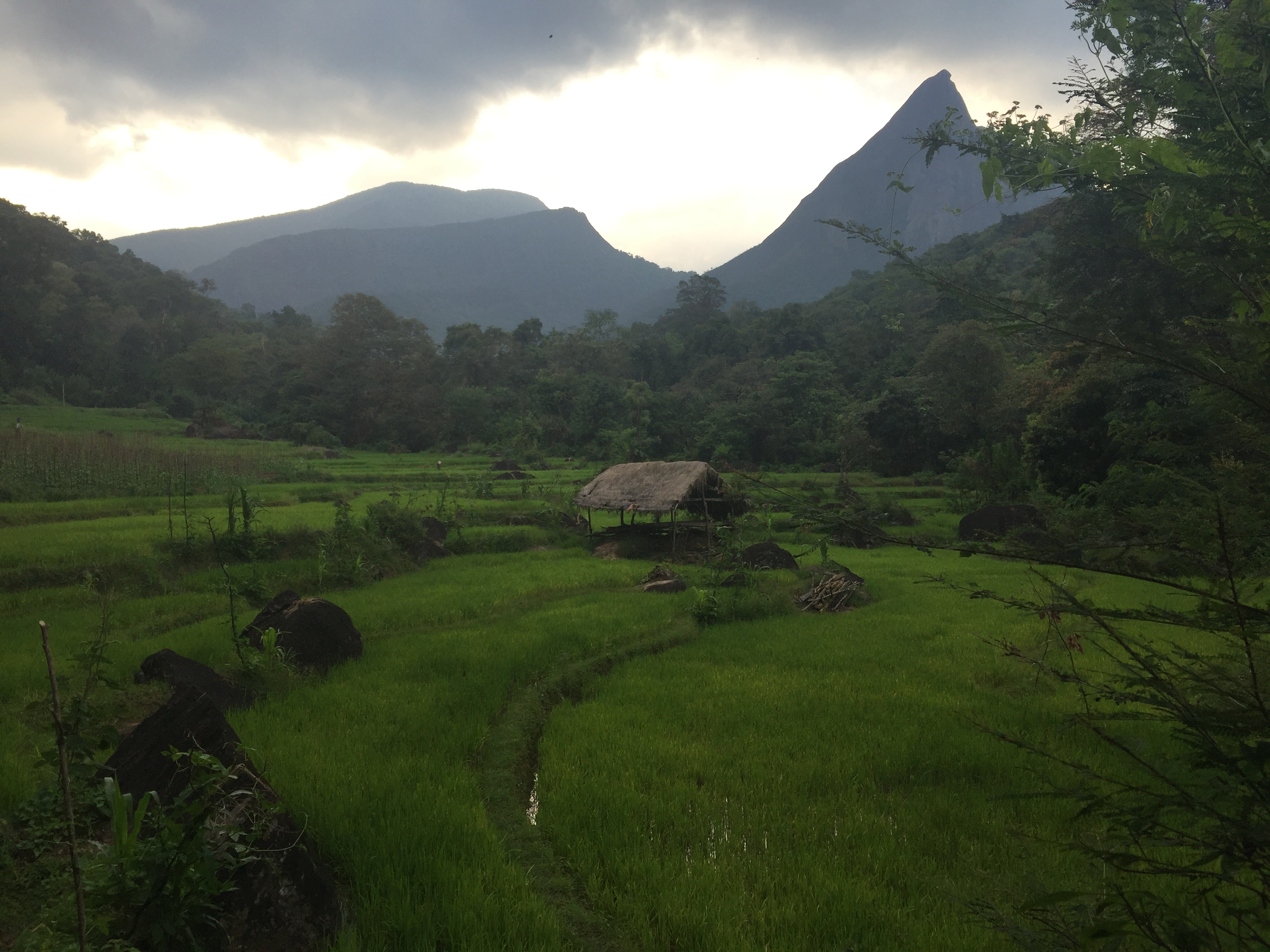 Our excited Navaratna Aiyya took me to another waterfall where he made me slide and jump, although I am water phobic; he insisted that I get rid of my fears and I did. As we walked back, I saw one of the most amazing sunsets behind the Lakegala Mountain. The colors the sun had left been reflecting on the paddy fields like a mirror, the houses were lit up and I saw farmers still working in the field. We also met a blind man who was working on the road, I was so inspired by his dedication; no one in this village sits idle. If they are idle, that’s only to have a laugh together over a drink.

I was told earlier about zero network coverage in Meemure, except for few landlines in the house. They have electricity that is generated by hydroelectric power only in the night funded by United Nations. There is only one van that operates once a day to and fro from the nearby town called Hunnasgiriya, it’s a 15+1 seater van and about 50 people manage to sit, stand, sit on others lap, hang on the door! Oh, it’s not just people, even their crops are sent by only this van to the town market! Police have never stepped in the village; if there are any problems they solve by themselves. There is one post office that operates from this village and one school that teaches until 5th grade, they need to go to the nearby village to study till 10th and then to town to continue further.

I had to pinch myself many times to know if this is a reality; it is hard to believe that a life like this exists.  I was wrapped in a magical and imaginary world; there is life in every grain of mud to dew on the leaf. It’s not a village. It’s a LIFE.

5 responses to “Experiencing the richness of life in Meemure”